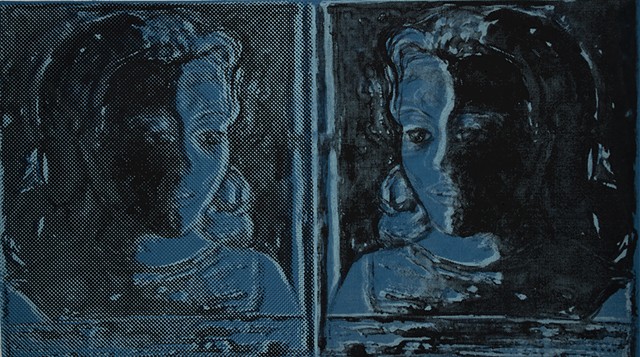 ARTIST STATEMENT, STILL PICTURES My current work takes inspiration from the mediums of film, video, and digital video. I am fascinated by the way the moving image conveys visual information. I make “still” pictures (Drawings, Prints, Paintings) to play with the rich visual effects I observe. I am particularly interested in personal communication in this era of media-saturated culture.

These representational works are appropriated from film stills. The main body of the work is a kind of portraiture derived from composites of film stills. This refers to the closeup shots often seen in film to establish communication between two people. Some works include text; a few words of dialogue spoken by the subjects. In other works, the representation is obscured by “noise,” or lines and shapes resembling image pixilation. This mimics the way images in film, video and digital video are affected by electronic transmission.

These still pictures address the power of media. Traditional film and digital technologies create a world that we are drawn to and absorbed by. As a viewer of this mediated world, I interpret the layers of imagery that surround us.